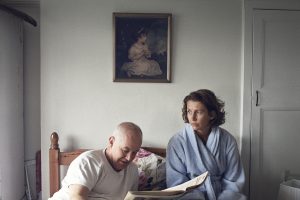 This image was shot for a public health campaign on dementia for the NHS in the UK.

A crucial aspect regarding this commission was to maintain sensitivity towards the emotive nature of the subject. Using natural light and keeping the team small (photographer and assistant) were vital to creating the documentary style the series called for.

On the day of the shoot, it was about trying to get the right range of emotion, and not portraying sadness or concern. The light, texture and muted colours that shooting on film have produced gives it believability (although shot with actors) making it relatable, natural, and creating a very intimate portrait.
***
This image won Best in Book in the Creative review photo annual in 2013.